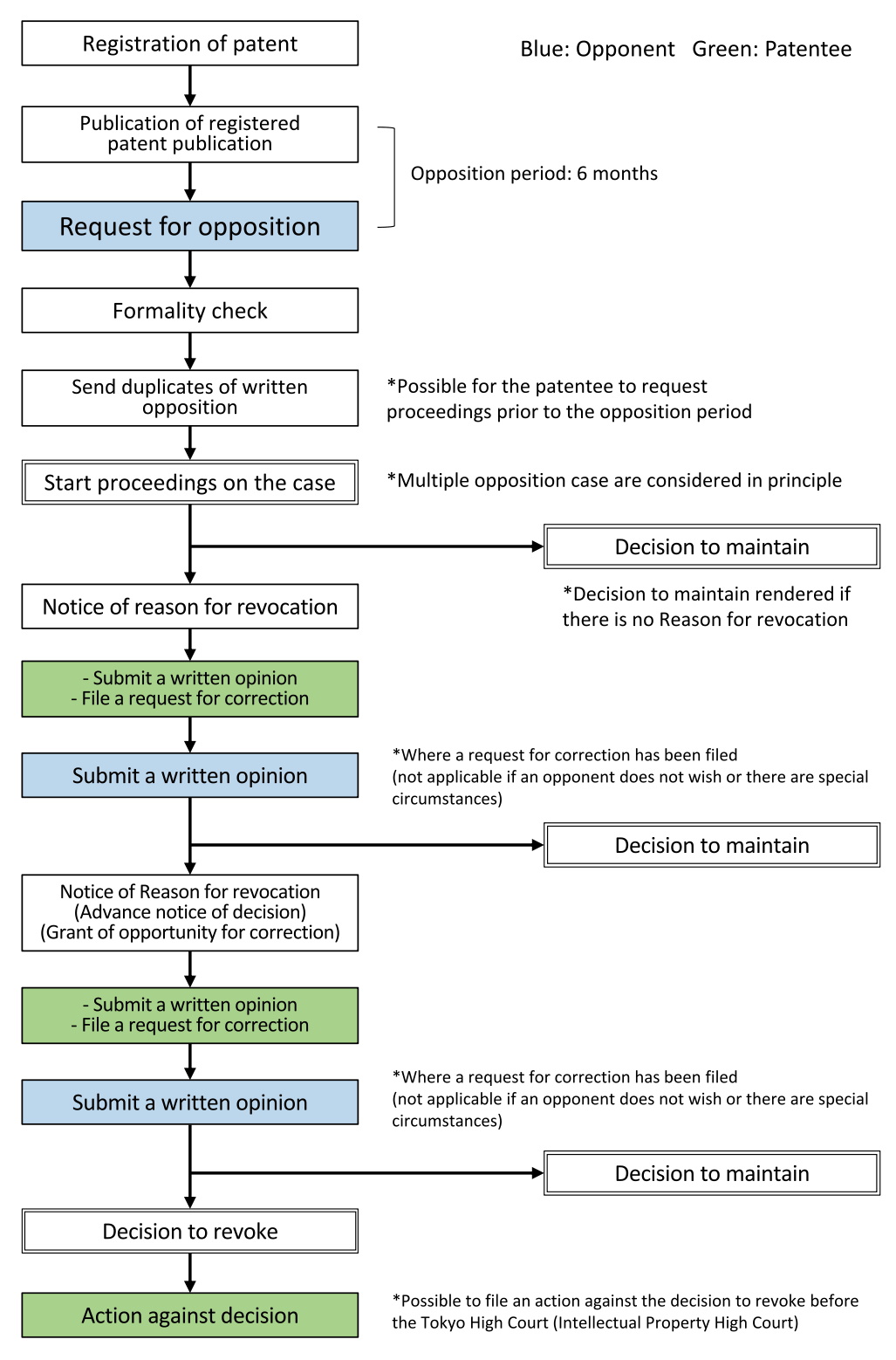 Outline of the System of Opposition to Grant of Patent

1. Objective of the Opposition System
The System of Opposition to Grant of Patent provides third parties with a wide range of opportunities to seek review of a patent within a fixed period after the grant of the patent so that the Japan Patent Office examines the appropriateness of the disposition of the patent in response to an opposition thereto and, if defects are found in the patent, attains early stabilization of the patent through corrections.

3. Opposition Period
Any person may file to the Commissioner of the Patent Office an opposition to grant of patent within six months from the publication date of the patent gazette containing the patent (main paragraph of Patent Act Article 113)

5. Reason for Opposition
Reasons for opposition to grant of patent are restricted to those specified under the Patent Act Article 113 (e.g., novelty, inventive step, support requirement, enablement requirement, new matter) and the other reasons are not eligible.

7. Proceedings Body and Administrative Judges
An opposition to grant of patent is examined by a panel constituting of administrative judges to sufficiently secure fairness, independence and appropriateness of the proceedings.

9. Notification of Reasons for Revocation and Request for Correction
Where a patent examined by a panel has been determined to be revoked, a patentee will be notified of reasons for revocationand given an opportunity to submit a written opinion and make a correction within a designated adequate time limit.
Apatenteemay submit a written opinion within a designated time limit (Patent Act Article 120-5 (1)), and may file a request for correctionof the scope of claims, etc. (Patent Act Article 120-5 (2)).
The second notice of reasons for revocation is the notice ofreasons for revocation (advance notice of decision) in principle.

10. Decision to Revoke and Appeal
When multiple requests for opposition to grant of patent has been filed for multiple claims, a panel will make a decisionof revocation or a decision of maintenance for each of these claims.
Revocation action against an appeal decision may be made by a patentee to the Tokyo High Court (Intellectual PropertyHigh Court) (the Patent Act Article 178(1)).
Revocation action cannot be made against a decision of maintenance (the Patent Act Article 114(5)).  Meanwhile, invalidation trials can be filed.